Posted on November 9, 2017 by Usagitsuki

In the previous post, HERE , I described various ways to do bases for 6mm WW2. Now I thought I’d go through the process of making the bases from start to finish. These being some Soviet cavalry bases, and 2 smaller 40mm square bases for objective markers.

Here are the figures glued onto the 2mm mdf bases. I’ve painted the bases where the streams go and this time I used double-sided sticky tape to hold the clear acetate in place. Roads are made with polyfilla, and some filler has been used around the armoured car bases as these have been raised up to compensate for the fact that the cavalry figures are on bases. This may not matter much in larger scales, but in 6mm the figure’s base is a significant height. There’s an open gate on one of the bases which will eventually have a hedge. The barbed wire fence is made out of cotton and plastic bristles as described previously. 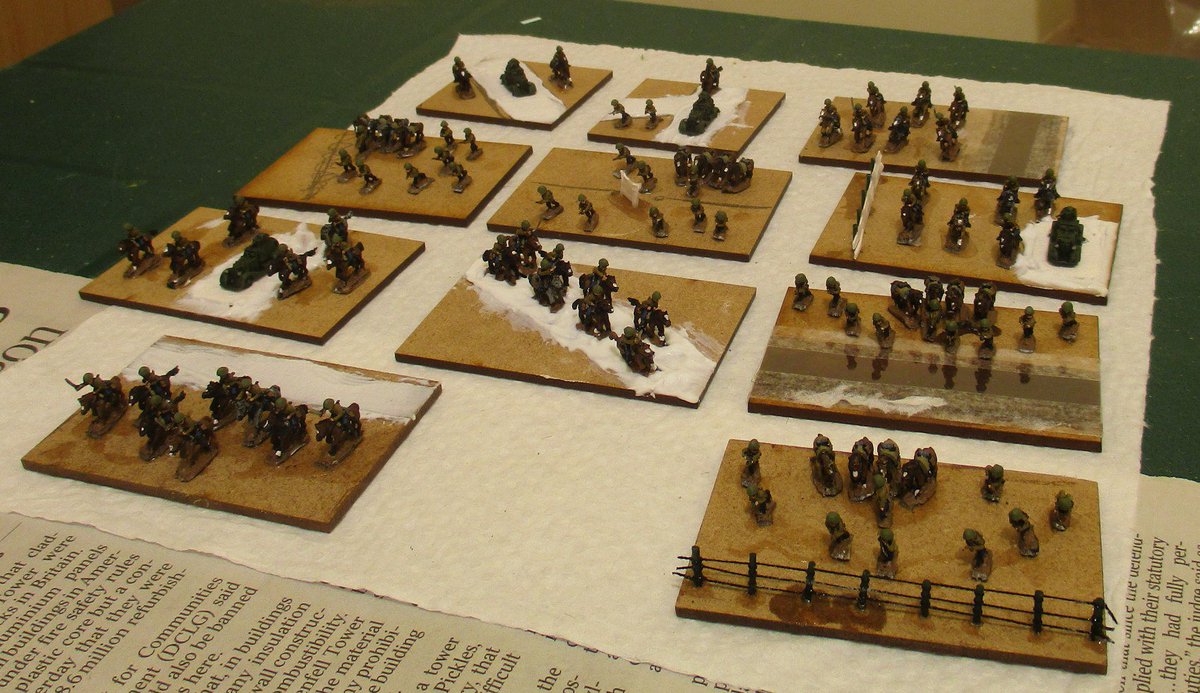 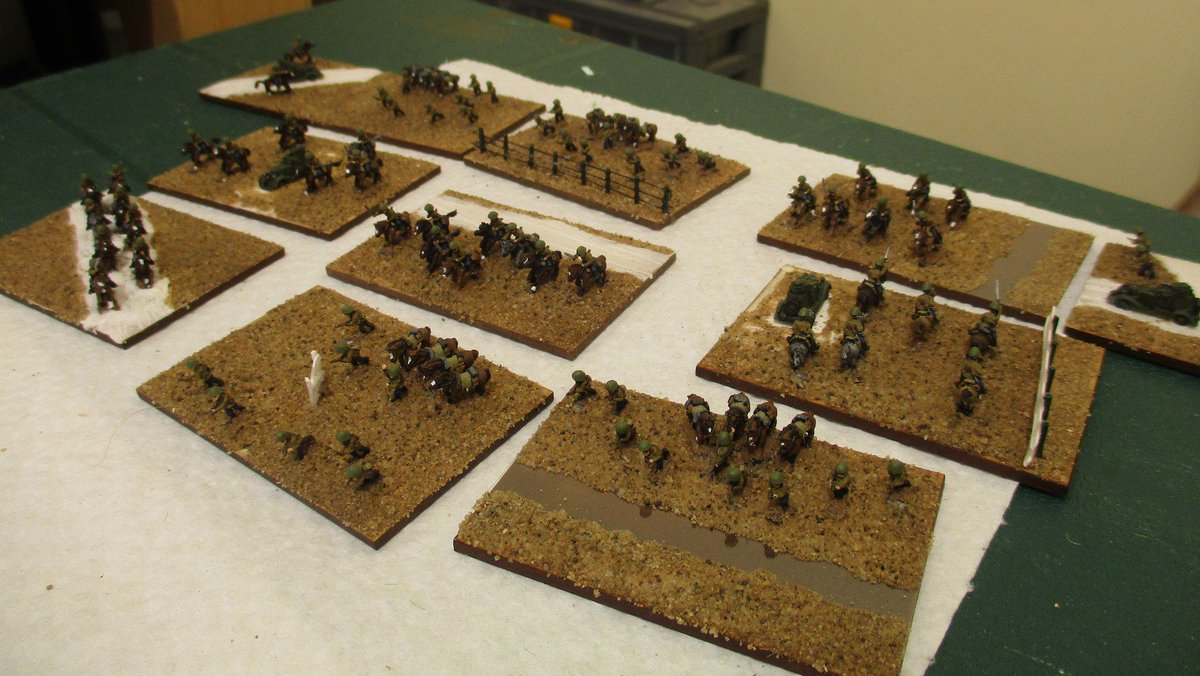 ^PVA glue and sand is used to cover the bases, leaving the roads. The sand and glue is also applied over part of the acetate to define the irregular stream edges. 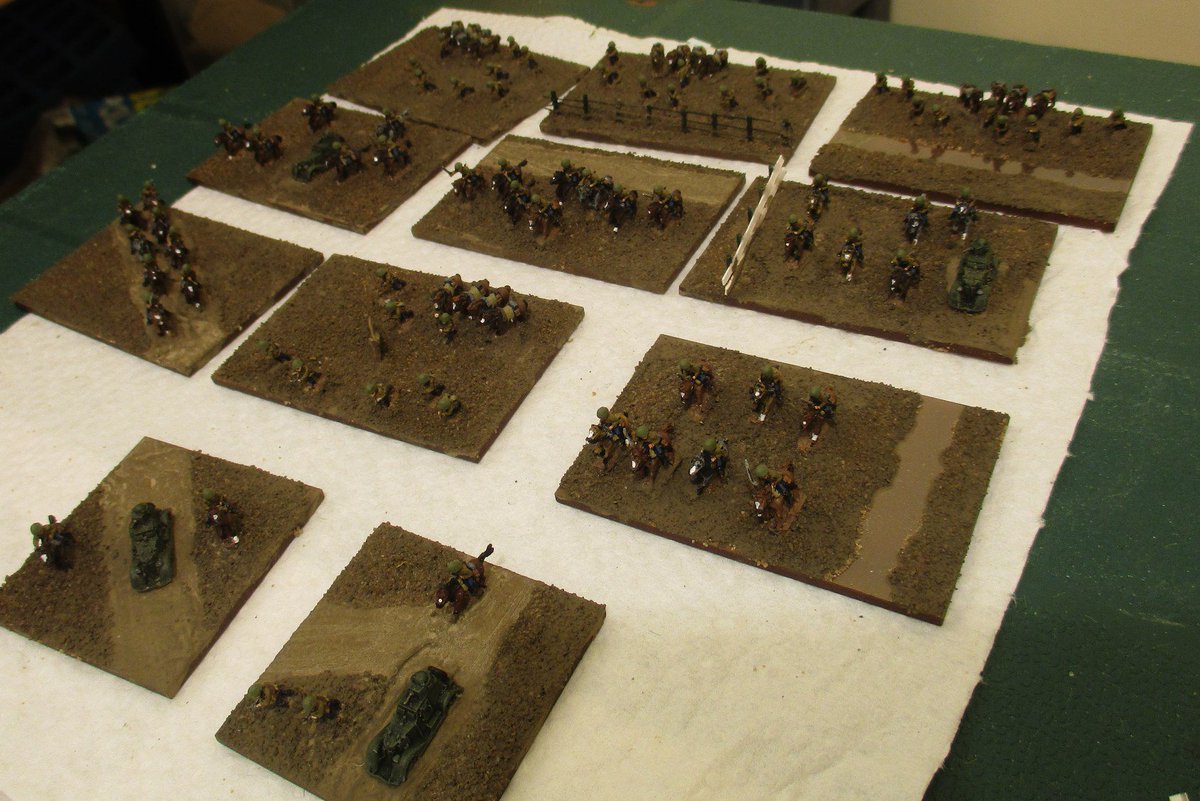 ^The bases are all painted an earth colour.

^The details of the base are painted in, fences, gates and roads etc.

^Now the first colour of static grass is applied. Again, this is applied with an applicator to make the grass stand up. The grass here is 2mm Mininatur ‘Early Fall.’ 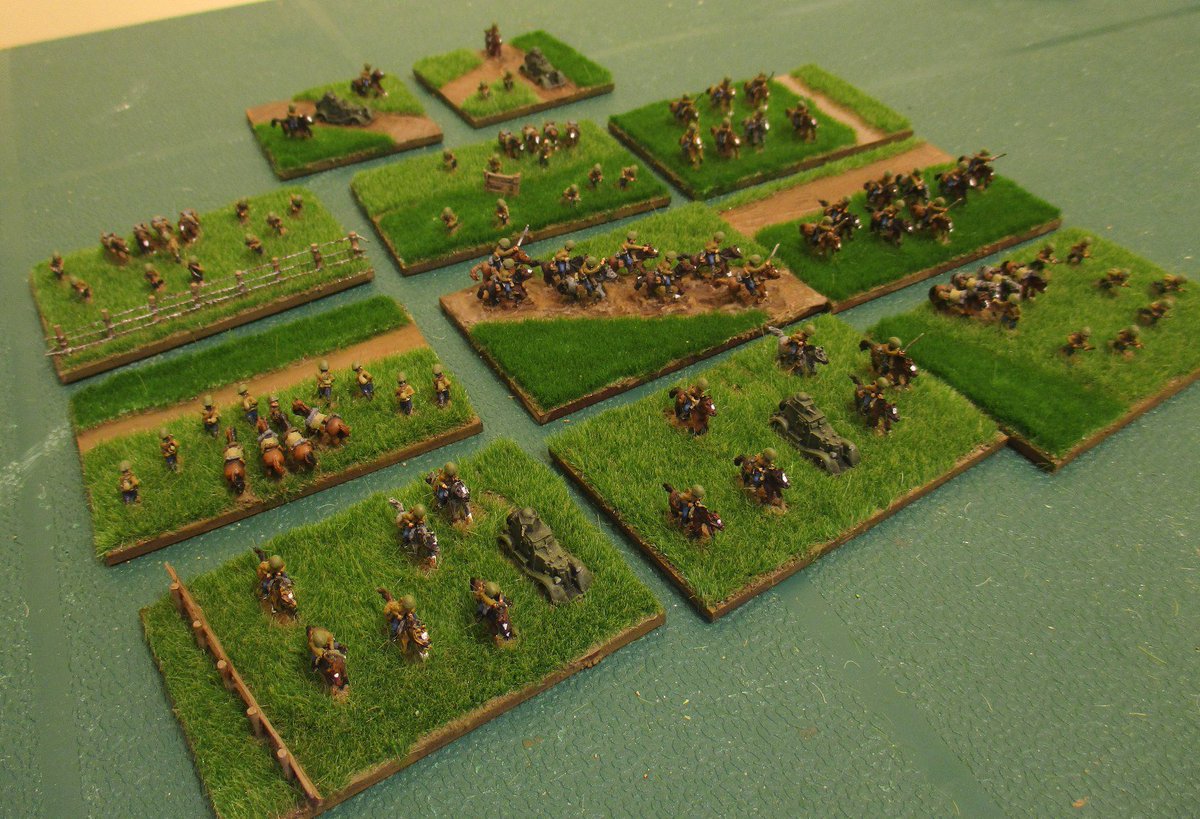 ^The second colour of static grass is added. I think having 2 colours where there is an obvious border such as a road or hedge etc adds a bit more interest to the base and helps to better define the different areas. The second colour is 2mm Mininatur ‘Summer.’ 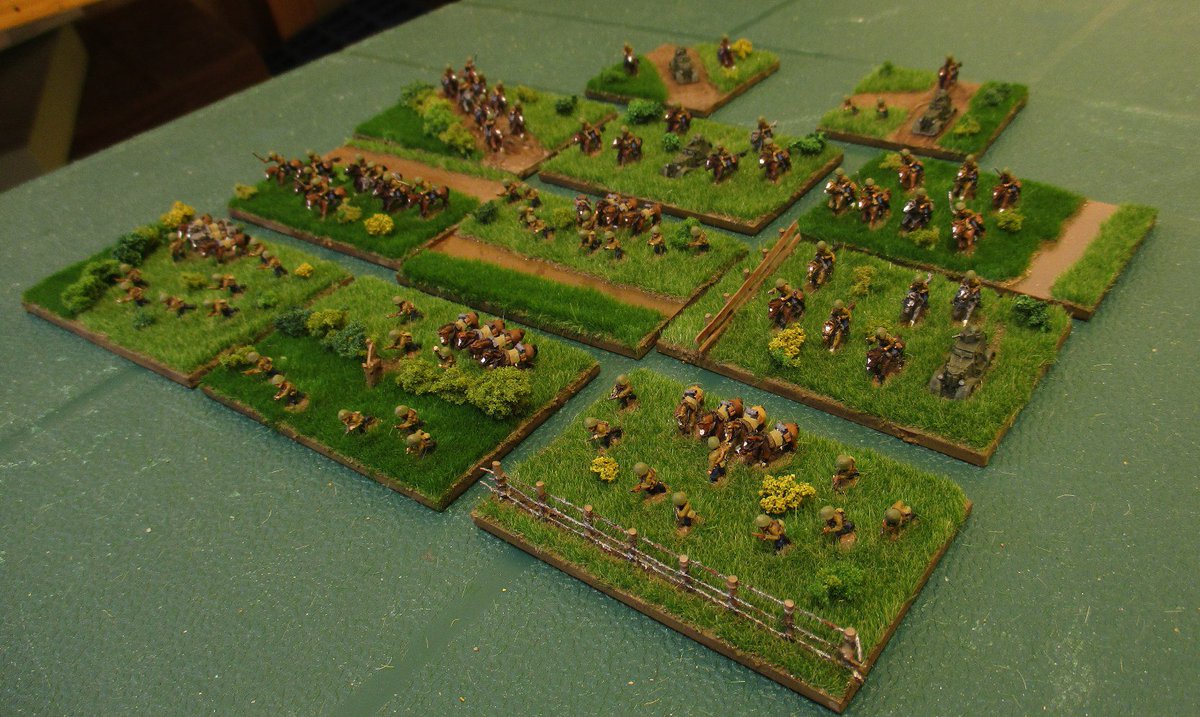 ^Lastly, foliage is added. Roads and field borders can be lined with hedges, and random bushes can be glued onto open spaces. The foliage here is mostly from Gale Force Nine. 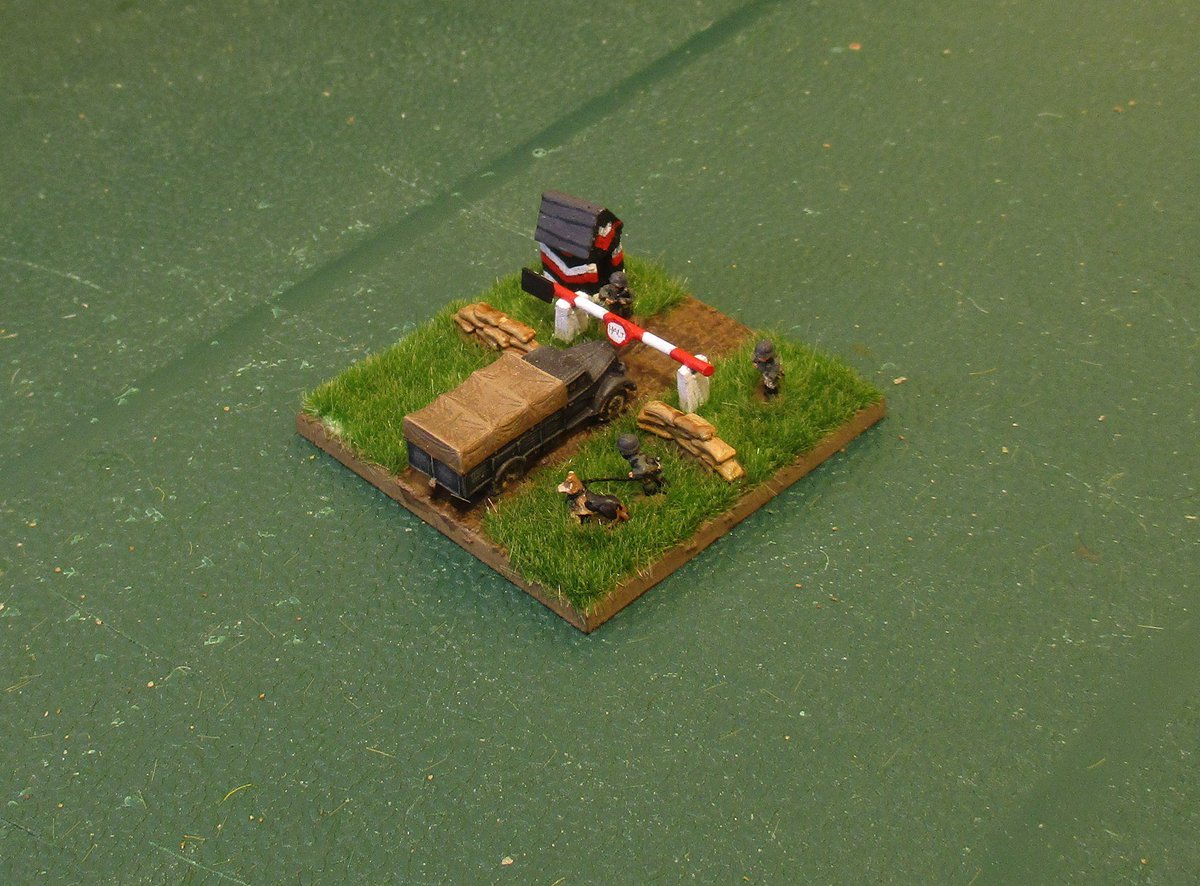 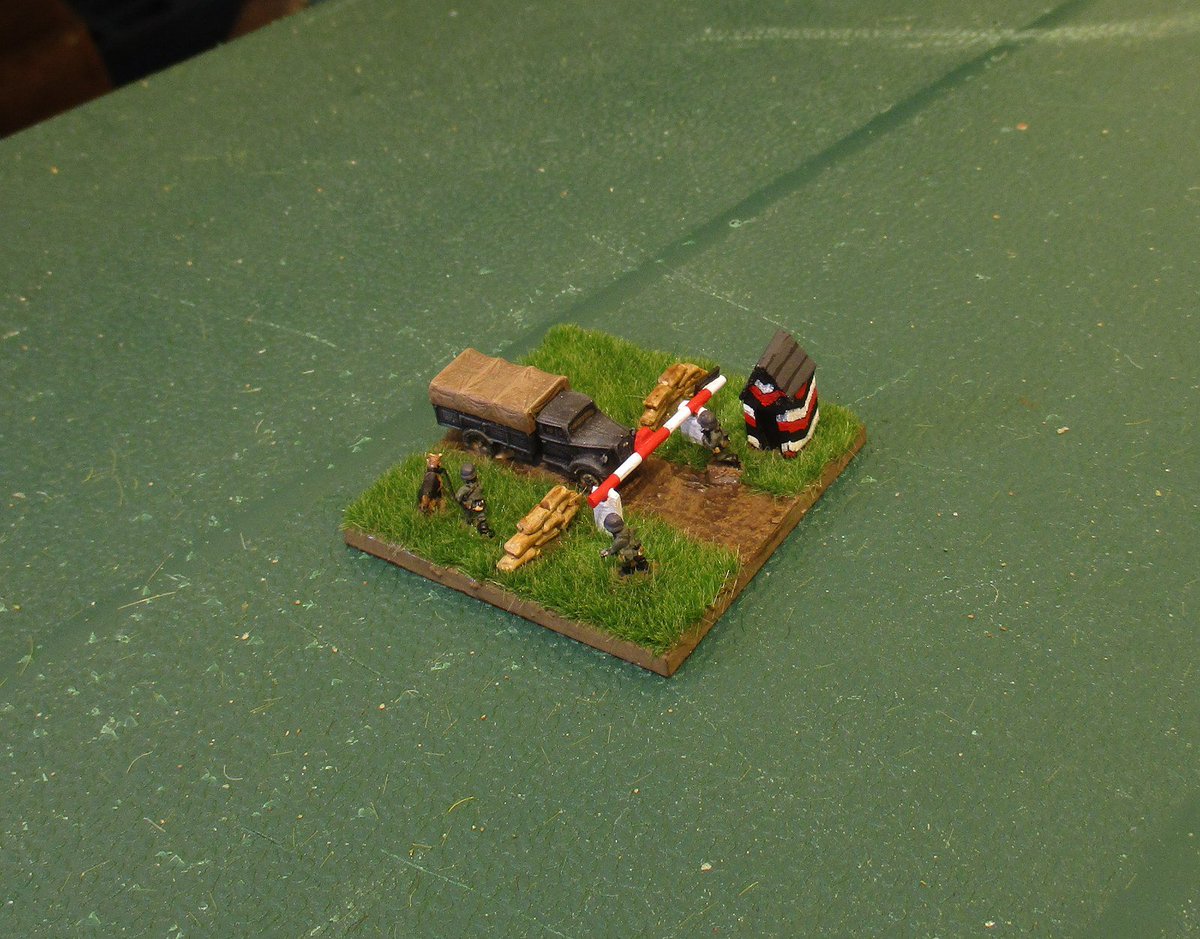 The truck is GHQ, the figures are Adler, the dog is Heroics and Ros. A piece of cotton is used for the lead…. The pole is, unsurprisingly, plastic bristle. The supports are bits of 2mm card with a notch cut in them. The halt sign is a bit of greenstuff flattened out very thinly and then a circle is cut out using a paintbrush cover tube. The sentry box here is a piece of balsa: 3 cuts and the doorway chiselled out and it’s done, 2 pieces of thin card are added to better define the roof. While this kind of thing can seem daunting because of the size, it is also easier in some ways than larger scales. In 15mm or 28mm, you couldn’t get away with making the box out of a piece of balsa. You’d also want more definition on the pole supports in larger scales.

So, when it comes to 6mm, think of the possibilities rather than the restrictions. It’s a great scale that lets you do things you could never do in larger scales. It often requires a completely different approach, but that’s part of the appeal in my opinion.

This site uses Akismet to reduce spam. Learn how your comment data is processed.