On Crusade with ‘To the Strongest’

I finished a Frankish Crusader army using the excellent Legio Heroica figures some time ago, but they’d never seen action on the battlefield. Finally I got to take them out of their box and get them on the table.

The opposition were very Turkish, the rules were ‘To the Strongest.’

God’s eye view. Crusaders set up, Turks still deploying. The Crusader plan is to have a stable infantry line with both flanks refused. The crossbows are protected by spearmen on each side. On the right, Gerard de Ridefort, Grand Master of the Temple, led a command of Templars and Turcopoles.

Reynald of Chatillon commands the left. Calm, reasonable and obedient to orders, were all things Reynald wasn’t.

Gerard De Ridefort, left. Not known for his caution either.

The Crusader centre under Balian of Ibelin watches the Turks advance. The yellow counters are arrows. And there’s a hell of a lot of them.

The Turks advance and prepare to move into archery range. The crusader plan is to stay solid on defence and only charge out if an opportunity presents itself. The commanders will move across the line to aid in rallying or by using their re-roll to get more shots with the crossbows. 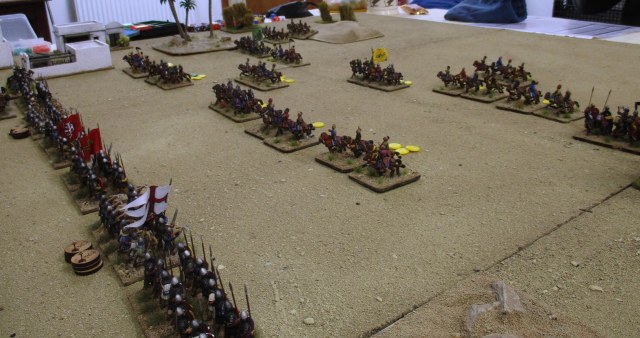 Here they come. The Turks begin the arrow storm. However, the crossbows outrange both them and foot bows, so the usual shoot and retire tactics aren’t going to work as well for the Turks.

The crossbows claim a victim and follow up with another. Balian joins them to keep the activations going. The Turks panic here and withdraw out of crossbow range. Despite the crossbows running low on ammunition, the Turks are reluctant to close again. 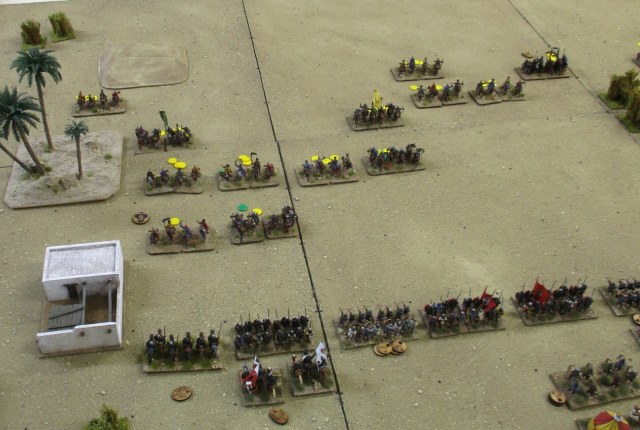 On the Crusader left, it’s a similar story. Here, Reynald joins the spearmen to rally them. The Crusaders are confident of being able to stand up to the shooting, and rally off hits before they become lethal. The crossbows strike fear into the Turks, despite not hitting anyone. I started out sheltering my knights behind the spears, in classic Crusader fashion. However, the knights’ save was as good as the spears, so this was unnecessary in game terms, which didn’t feel right. The Turks would move to between the village and the trees to shoot out of arc from the crossbows. This provided the opportunity for the leftmost knights to charge. Needless to say, the Turks evaded, but now they were in the woods so they couldn’t evade the second charge which destroyed them. 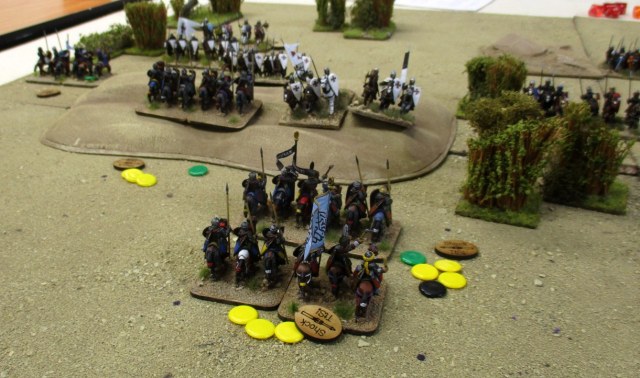 View from the Turkish side as De Ridefort leads a charge. Some knights from the centre command can be seen on the right of the picture. These have caught some light horse in a similar fashion to the other flank. The Crusader right moves up in support and then charges. They’re Templars after all.

The Turks handily evaded the Templars’ charge, and on their turn, they charge. Now, in TtS it’s really not sensible to let anyone with a lance attack you on their turn, so the Templars had to evade*. Again, this certainly didn’t feel right. It doesn’t make sense in the game to just take the attack, hope they miss and then attack back. Certainly not if they do it on a low activation number, as they’ll likely put one hit on you and then be able to try again. So the Templars all came back over the hill. 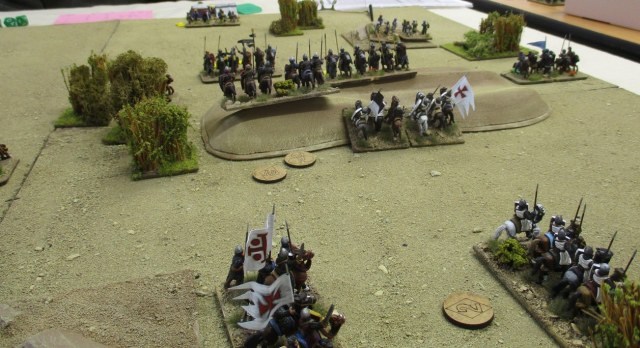 The Crusaders turn outwards to face their threatened flank. De Ridefort’s Templars have pushed back the Turkish Ghilman, and now the Turkish commander is isolated and finally dies in a lethal charge which puts two hits on his unit, and one on him. With that the battle is over.

The Turks probably over-estimated the effectiveness of the crossbows. They changed from organising a massed shooting attack, to withdrawing out of range. This effectively tied up the centre. I think we both thought we could win on the crusader right, and it could have gone either way there. But the crusaders were ahead in terms of losses so only needed to trade in order to win.

Ultimately, the game didn’t feel that much different using Crusaders to using Fatimids. The crusader knights charge isn’t any more effective than any other lance charge, and a slightly better save doesn’t compensate for it. I don’t think even downgrading the Turks and Arabs to a light lance would make much difference. This is the issue with generic ancient and medieval rule sets, some periods will work and some won’t.

* I made a mistake here as Knights can’t actually evade in TtS.

This entry was posted in Medieval and tagged crusades, to the strongest. Bookmark the permalink.

This site uses Akismet to reduce spam. Learn how your comment data is processed.